Skip to Content
Home Healing Allergy or Aversion?
by

(Trigger Warning: Sanctimonious or Simply Truthful content depending on how you look at it)

Nowadays if you ask for a food to be eliminated from your plate in a restaurant, they will often ask if you are allergic to that item or “just don’t like it.”

Though sometimes urged by my dining companions to tell them I have an allergy, I rarely do that. I want them to know I don’t like it. Some servers take the information with complete indifference. All they care about is what to tell the kitchen. Others hold your eye for one extra second. They know exactly why you don’t like it and they feel slightly uneasy. (Less frequently, they know why and silently acknowledge you as an animal friendly sister.)

Here’s what I just don’t like. I don’t like carcasses on my plate. And I don’t like gooey shit made out of something that came out of the oozy pussy bloody-with-infection udder of a miserable cow.

I don’t like that someone has most likely lied and told me the cow was happy.

(Not Graphic) Beside being adorable, pigs feel pain so I just don’t like eating them, even if you call their chubby bellies bacon. I’m posting an awesome video about bacon here. (Warning: Graphic Content) I just love how friendly they are to the pig. 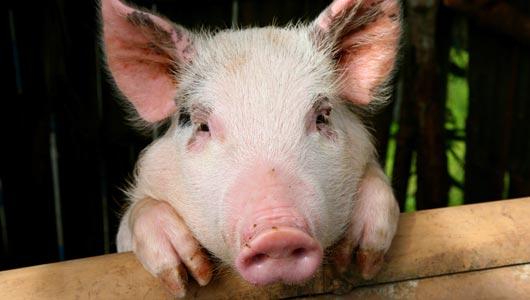 But I just don’t like it when they string him up by one leg and let him bleed to death and call that humane. I just don’t like how, if someone did that to a dog – maybe a dog whose “owner” dresses them up like a goddamn baby, or just any pet dog allowed to look and behave like a dog – we’d be screaming bloody murder. We’d be calling all over Facebook to have that person eviscerated, castrated, or at least thrown in jail.

And that’s only for one dog. I don’t like how billions of other animals are eviscerated, castrated, and thrown in jail every year and no one gives a shit because, well, bacon. I just don’t like that.

I just don’t like that people who write things like I am writing here are often considered extreme, or smug, annoying, or preachy. I don’t like how I’m called sanctimonious if I say that torturing and killing animals isn’t nice.

Here’s one thing I’m not yet sure if I like or don’t like. The last restaurant I went to was an upscale, foodie place. Instead of asking if I “just didn’t like it,” they had an upscale way of putting it:

“Do you have an allergy or an aversion?”

Ooh, aversion, I might like that one. On the one hand, it almost formalizes and attributes a certain seriousness to my preference, as if it were a medical condition causing illness at the sight of food fashioned from animal parts and drippings.

On the other hand, slipping it into a neat little category rather sanitizes and equalizes it. It says there are “just” categories of people in the world, those with allergies, those with aversions, those who just love eating murdered animals.

I know I’ll already be dead when meat eaters become extinct and the Era of Torturing and Eating Innocent Beasts will have taken its place in history among the Ice and Dark Ages. But I can imagine the nearer future when self-self-rightousness over meat will come from the I-have-the-right-to-eat-whatever-I-want crowd.

Instead of a sad tin of mushy tofu on hand in the back for the annoying vegans who are tired of garden salads, restaurants will have a few grisly steaks and greyish burgers stashed in the freezer. If you have the balls to ask for one, the server will say down their noses yet always professionally, “Oh, absolutely, no problem. Now is that an allergy or just indifference?”