Skip to Content
Home Healing Get Rich Quick Scheme
by

I am doing a 30 day gratitude journal. Yesterday was Day 6. I believe in the Law of Attraction. It says if you really want to go places, be happy where you are. Stop striving and be happy. Let the flood open around you instead of crazily lapping up trickles from a drying stream.

It’s a slow week at work. This week would have scared me into furious and useless marketing strategies in my earlier days of private practice. But now I am used to weeks like this. And I have taken up studying the Law of Attraction. Therefore, I feel only grateful for the free time to enjoy household projects, reconnect with friends, and rest.

So instead of fretting I went to the beach with a friend. On Wednesday. During business hours. Temps were in the 80s with low humidity. There was no traffic. I left the AC off and flew up to the north shore with my windows and sunroof open. For all I knew I could have been driving a badass Jeep Wrangler instead of a used Honda Civic. I could have been eighteen with a rich daddy.

Within an hour my friend and I were busily applying sunscreen, chomping salads, and catching up. The catching up boiled down to bonding over hardships like husbands who worked and watched soccer way too much, and women in our circles who were bitches.

It turned out that both of us had considered learning to kayak when the husbands were busy because well, codependence is not cool and we said we loved the ocean. We both had already tried surfing. And we had both discovered that, contrary to the spiel of our imaginations, there was nothing badass about us at all. In our lame-ass book, loving the ocean did not involve falling into it, especially while tethered to a heavy board that might throw us under the water then hit us in the head when and if we resurfaced.

There was a boathouse a stone’s throw from our beach chairs and we’d been lazily watching women and children glide into shore exhilarated. They pulled their boats in giggling and exhausted. If them, why not us?

Why indeed? This question can get big if you let it. How do small things get so big? How had we never been in kayaks? We looked at each other like Thelma and Louise.

Twenty minutes later, life vests and all, we were navigating the buoys and small craft blocking our entrance to the open water. I admit for the first little while we did some twirling in circles and hoping the big boats steered clear of us because we clearly could not steer clear of anything.

Kayaking had looked fun and easy. We hadn’t banked on feeling helpless like this. It hit me that the reason I had never tried this was because of fear. I hadn’t thought I was afraid. I’d only seen people skimming breezily across the water, one and the same with the ocean. Seemingly nothing to fear, yet there had to be some reason I’d never done it.

Here it was. We were not skimming. We were bouncing. We were headed for rocks. Our back pack was getting wet. What if we couldn’t turn around? The wake from that fast boat is way too big. What if we tip over? Oh gosh, what if our cell phones drown? What if they had to come get us? Do they do that? Does anyone get stuck? Would we be the first? Would that be humiliating?

That’s a lot of fear for being in a harmless little boat 50 yards from shore. I was spitting mad that I’d waited so long to master this monster. 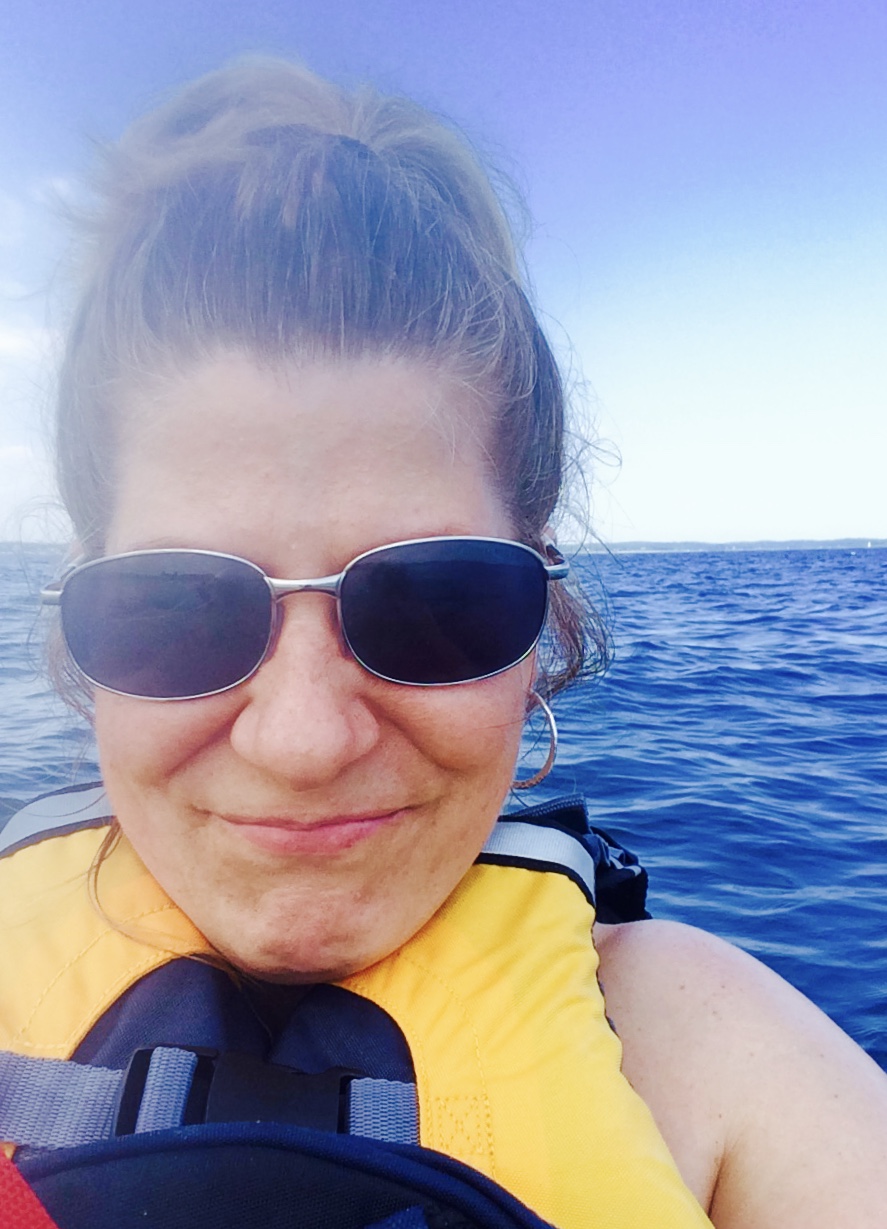 Because soon were sitting out there with our feet up among the lobster pots and sailboats. We were laughing and racing with some unruly boys in a speed boat who had swooshed by too close, trying to scare us. Karen said, “I can’t believe an hour ago we were sitting in beach chairs, feeling poor and complaining about our husbands!”

Everything had changed and it didn’t matter who we thought we were. We could have been rich, poor, married, or single. We could have wasted years thinking vaguely of how we’d like to take up kayaking but didn’t. Or we could have been paddling experts for the past twenty years. We could have been cormorants or two middle-aged ladies. In that moment we were happy and grateful to be part of the world, no longer sad sacks splintered off into tales of staleness and lack.

Yesterday I didn’t earn a dime but I owned the ocean. Ok, I owned less than a mile of a quiet harbor in Marblehead. But I spent time with a funny old friend. And the Law of Attraction gratitude thing worked. My cell phone did not drown and when I looked at it again at the end of the day, it told me I had three brand new clients coming in by Friday!

It is true that changing your mind changes your life.