I remember my Grandma Z as bubbly. Words bubbled out of her mouth. Her blonde wavy hair bubbled around her eyes. She bubbled around the house. Making breakfast, finding our shows on TV, finishing her chores on Sunday mornings, so we could go, as she would say, “Out! Out!! Out!!!”

My funny Gram didn’t make any sense! She liked to say “snuggle bunny keechee koo.” That meant it was bed time. She liked modern music but couldn’t figure out the lyrics. She sang along anyways, in her shrill, bubbly voice, substituting the phrase “boooo-deeee-guuyyyy!!!” for any words she didn’t know. Or when people were talking too much about th 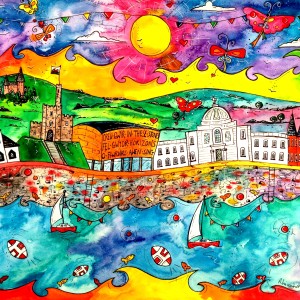 ings that didn’t interest her, she would look at us and sing out, “boo-dee-guyyy!!!!”

(boo-dee-guyy is now a word in my family. Used when talking about things we don’t quite get. “What was he talking about anyways?” “I don’t know. boo-dee-guyy, right?” And my Dad has taken to calling himself the BooDee Guy!)

Gram told me she talked to sparrows (and they talked back) and she took me and my sister on long rides on Sundays. To East Cupcake. Which meant she had no idea where we were going. We didn’t care. We always felt like anything was possible and something good was about to happen!

Gram has been gone for 20 years. Even now, my best days as an adult are those when I think about being a kid, piling into Gram’s car, Esmeralda.

Gram said Esmeralda knew where to go. All we had to do was get on board, have fun, and see where we ended up! Adults claimed this to be an untruth because, direction-wise, Gram, Esmeralda, and we were often lost. Knowing where we were on the map was not the important to us, though. We were bubbling along toward East Cupcake and that’s all we needed to know.

My grandmother was a master of simplicity – happy, kind, and free. But she also owned a deep and private sadness. Her favorite song was John Lennon’s “Imagine.” When it played on her transistor radio, WHYN FM, she’d top mid-kitchen and stare, forgetting to stir her cake batter, singing along, misty distant eyes.

She knew every single word.

The image is a painting is by Welsh artist Rhiannon Roberts.*

It looks and feels just like going to East Cupcake with my Gram!

Here is Rhiannon’s website where you can see more of her colorful, whimsy art!

*Any unattributed images on my blog are either mine or used per Creative Commons license as far as I could tell. Please contact me if I’ve used your image in error!