I wasn’t given a religion. My parents were raised Catholic but had given up church by the time I arrived on Earth. All the babies on my block got baptized, but not me. As we grew up, my friends went to something called catechism that eventually resulted in another thing called First Communion. I didn’t know what any of it was, but I felt so left out.

I did know that I did not get one of those special white dresses like my friends did. With VEILS. When they opened the boxes to show me, I was crushed. As they pulled aside the tissue paper, I remember looking down, not at the dress, but at my red Keds to hide the envy overtaking my six-year-old eyes.

At the time, I was too young to understand that my parents were standing up for their beliefs. Now I realize how hard it must have been to be true to themselves despite everything in the community that had come before me, and despite their six year old begging to go to church and run around in a veil like everyone else. Now I admire them for it.

I used to go to church with my friends’ families sometimes, on Saturday night if they’d invited me to the movies afterwards. There wouldn’t be time to stop back home to pick me up after church, so they let me tag along. They were good people. If it bothered them that I couldn’t say Hail Marys and was disallowed the body of Christ, they never let on.

During the Mass, my friends were often bored. They fidgeted, giggled, and got “the eye” from their parents. I tried to act cool and bad around my friends. But I loved church. I loved the heavy, myrrhed and frankincensed air. I loved how we said, “Peace be with you” to our neighbors. The crucifix tightened my throat and stung my eyes, and I didn’t even realize that there had been nails in the live version. I didn’t know words like humiliation and subjugation, but I felt them when I looked at Jesus, and also a deep love and sense of joy too big for a kid. So I fidgeted and thought about popcorn and Junior Mints.

I wasn’t given a religion, but I love God as much as any churchgoer. It’s just that my catechism started late and still isn’t finished.

At Clark University I learned psychology and I learned about Judaism. Until freshman year the only Jewish person I’d known was my pediatrician, the beloved Dr. Levin-Epstein. When we went in for our shots, we understood nothing about his name, except that it was too complicated for kids. So we called him Dr. Ralph, and knew he was good because Mom had asked him to name my twin sisters, Rachel and Rebecca.

At college there were lots of students with similar names who had different ideas about Jesus. The realization was new on me, just like eating bagels after a lifetime of cabbage and kielbasa. It was the first time it struck me in a tangible way that religion and Catholic weren’t synonymous. Of course you can see out from inside your bubble, but the world is suddenly closer and unsettling when it breaks.

A bigger bubble broke in my twenties, in the Peace Corps. I learned about Islam. Five times a day the call-to-prayer blasted across town through a crackly old loudspeaker. Especially the twilight one made me stop and stare at the sky, my eyes glazed over in my own kind of prayer. Twice a day, the kind Muslim people brought meals to my door in a world without groceries I could understand, or supermarkets to buy them from.

In Seattle in my thirties I obsessed over books about current world religions, but also ancient societies where Goddesses ruled by compassion and bonfires. I met witches and high priestesses of I’m not sure what. They used to invite me for drumming and dancing, though, and I showed up like I did at Catholic church, clueless but excited to meet spiritual followers of anything.

Heaving and stomping to the djembes and djun djuns, I was even more grateful to my parents for not bringing me up Catholic. If they had, I may have been afraid of witches. I may have missed those nights that began slowly, with low whispered chanting, then swirled and crescendoed till we were howling Blessed Be to the Moon.

In Seattle there was yoga, too, hours and hours of poses and meditation, of singing hare Krishna. And more hours in the dojo learning Aikido, the formality, and who knew? the spirituality of conscious conflict.

My parents had their issues with the Catholic church. My Mom wanted to know why she couldn’t have been a priest, or even an altar boy. Dad was a thinking man at university the year I was born, lost in Hemingway and Bertrand Russel, nursing Jim Beam and rocking me to sleep to the Sound of Silence.

They didn’t much believe in pesticides or raking leaves (though they did sometimes bag oak leaves out of deference to our lovably lawn-loving neighbor.) Dad never teetered around cursing on a ladder, though, to nail Christmas lights to our house. They only hung a small wreath with a few twinklers on the front door. To decorate it, Mom cut out a little cardboard sign with gold stick-on letters from Woolworth’s: “Baby Jesus hates bright lights.”

It was an era of protest and they were, of course, protesting the commerciality of Christmas. But there’s a sense of sadness and hurt there, too. Can you feel it?

How lucky I am to have been given the gift of freedom of religion.

At this point in life I call God “the Universe.” If you had to pack me into some box of spirituality, I’d be tossed in the one labeled Buddhist-Leaning New Agey Middle-Aged Ladies.

Even so, lately I feel the influence of having grown up Christian, even if only by neighborly osmosis. I have Quan Yin in my office, and my spiritual practice is Reiki. This year, though, I am mysteriously moved to honor the arrival of the baby Jesus. True, the God of the long white beard has had some recent tribulations, but I still love Him, as I do Allah, Jah, and the Great Gitche Manitou, who I heard about first in Miss Hizon’s third grade music class, but later learned was a real deity to be respected, not a silly song to be giggled at. We all create God in the image of ourselves.

If the Goddess is Love, She includes everyone. Meaning everyone.

Anyways, this year I feel crazy to put up lights. Yesterday I spent hours curating playlists of churchy chorals and Mahalia Jackson. (Ok, and Johnny Mathis.) Today I’m going to Mahoney’s to buy  that special, $27 candle they sell because it smells exactly like my Christmases: past, present, and future. I’m thinking of my two Grams, and of gingerbread and Santa.

I’m thinking of my Mom. Dementia has stolen Christmas from her. Dirty fucking thing. She can no longer help us string cranberries or bake her secret-recipe cheesecake from my great-grandparents’ restaurant. At least we have the memories and those ugly salt-dough ornaments we painted as kids. She told us they were beautiful as she hung every single one, even the blue and purple blob, so proudly on the tree.

People ask me how I’ve slogged away with “only” massage as my work for all these years. Don’t I get bored? Am I not tired? How will I retired on so little money?

This is how: I’ve learned, despite lack of religion, to worship everything in life as a sacred creation of the Universe. Whoever walks through my door is a holy spark of God’s imagination. I honor her the way I honor animals and trees and Jesus.

Is there anything else I need to be doing besides practicing gratitude and love every day?

I have clients that have been coming to me every week, or month, or quarter. For years. Sometimes we talk. Sometimes we don’t. I know about their lives. Or I don’t.

Yes I get tired and bored. And what? It’s called being human and there’s joy in every part of that. Every day people come to my office and shut off their phones and we practice humanity together. I can’t think of a better job than that. Or religion.

“…Domu dore, here we stand, heart to heart and hand to hand…” 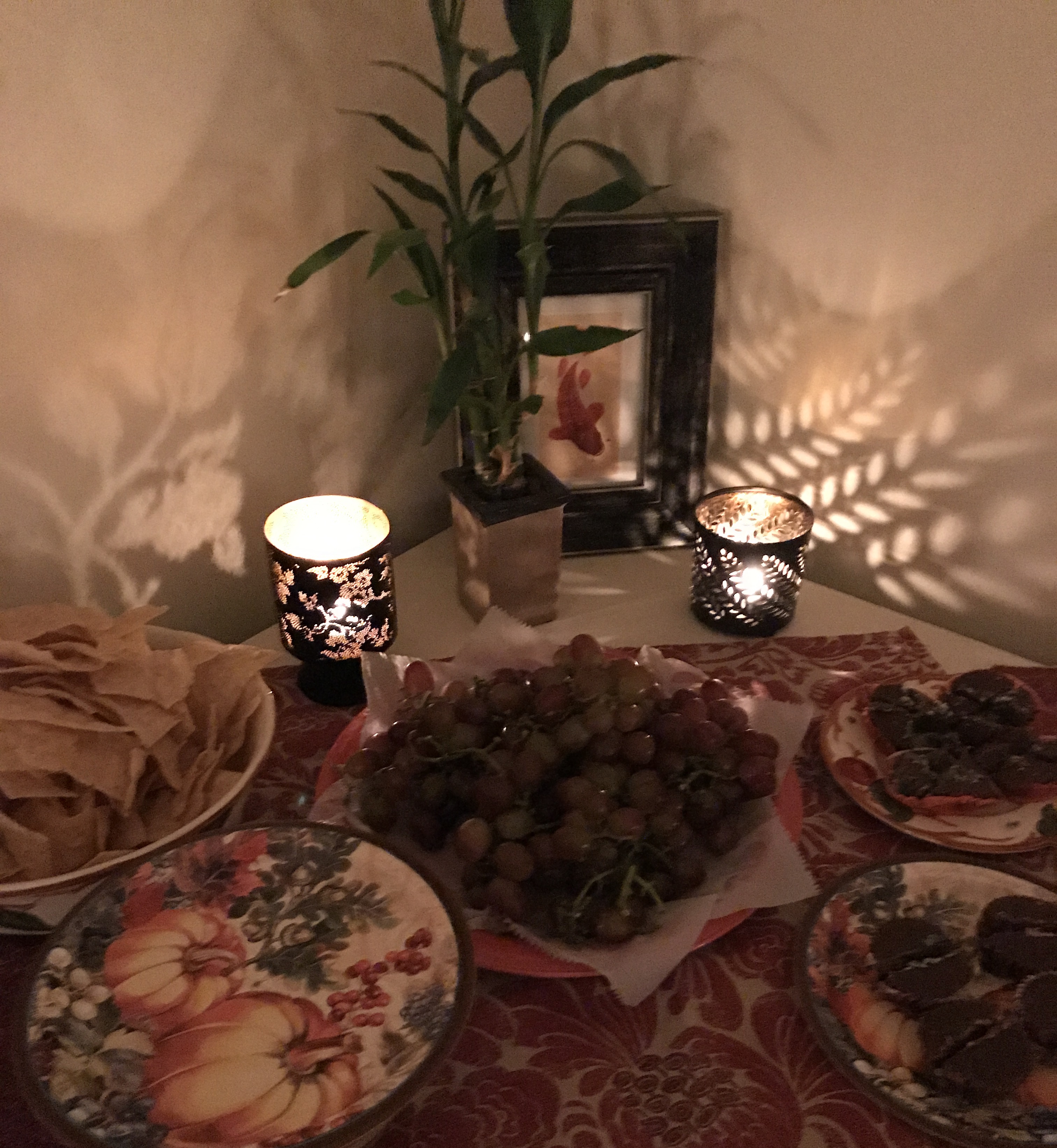