My Story:
The Corgi and the Canary

Most of us have heard the popular expression, “canary in the coal mine” It originates from coal mining lore which tells us that miners would carry a caged canary down into the mine tunnels with them if dangerous gases were suspected. As long as the bird kept singing, the miners knew their air supply was safe. If the gases killed the canary before killing the miners, this was a warning to exit the tunnels immediately. Hence, the phrase “living like a canary in a coal mine” often refers to serving as a warning to others. I hope sharing my story supports that mission.

Five years ago, I rented a cottage in Rockport, MA. Lovely and light-filled with sage green floors, it was a perfect live-work space for me and my art. Shortly after moving into the cottage, however, I started developing unexplained health problems. Chest tightness, problems with digestion, food reactions, and widespread inflammation in my body. I had always been healthy, so I was both perplexed and dismayed. Despite volumes of appointments and tests, no doctor could find the source of my illness. So, I began to imagine I was in the early stages of coming down with some kind of disease. After eight months of worsening symptoms, things changed. I finally got to the root of my health crisis through the saving grace of a corgi named Derby.

Here is Derby, all decked out in green for her 10th birthday party. 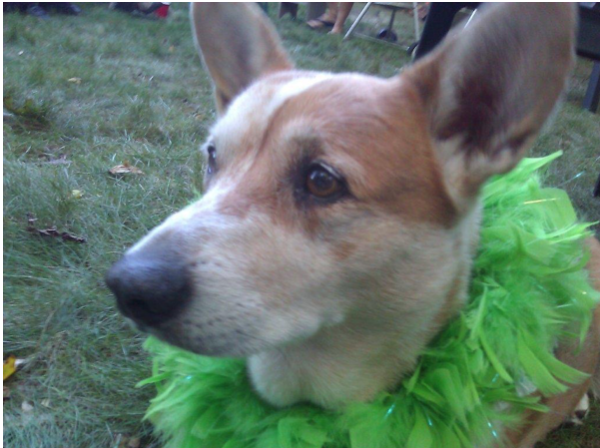 Derby is a welsh corgi, a cattle herding dog breed. Her lineage has been traced back as far as 1107 AD.  It is said that the Vikings and Flemish weavers brought the dogs with them as they traveled to reside in Wales. As far back as the 10th century, corgis were herding sheep, geese, ducks, horses, and cattle as one of the oldest herding breed of dogs. Needless to say, these dogs have a long history of looking after others. Besides herding, corgies also function as watchdogs due to their alertness and tendency to bark only as needed.

“The Derbs” as we lovingly refer to her, and her owner, Flavia, had become my new neighbors and close friends at the cottage. We visited outside by the garden and confided in each other often. Flavia shared that Derby had a special attunement to people who were not feeling well, and I could feel this as she came over to sit by me often. It was this highly attuned Derbs, with her keen sense and watchdog tendency, who solved the riddle of my eight month medical puzzle, and literally saved my life. .

It happened on a bright May afternoon. Two days of heavy rains had saturated the cottage walls and the midday sun was rising. Derby bounded into the front door of my cottage for the first time and started to immediately smell something suspicious. It was hot out so (I know now) that this weather had warmed up all the materials inside the walls, causing a smell. I hadn’t noticed because it had infused into the air gradually.

On that day, Derby was swept up in sniffing around every corner of the place. Flavia followed right behind her, calling out, “Derby what are you doing?” She turned to me, “This is strange. She never does that. This isn’t typical Derby behavior.” A moment passed and a perplexed expression flashed over Flavia’s face, quickly moving from confusion to concern. “What is that smell in here?” Flavia asked me. I responded quizzically, “What smell?” She looked at me square in the eyes, “There is a really strong smell in here. Something is not right here Peggy.”

My heart sank as I met her gaze, realizing something was very wrong in my seemingly pretty little cottage by the sea. Flavia followed with these sobering words, “I saw them put spray foam insulation in here Peggy. They were covered from head to toe spraying that stuff all over the place. You’re like a canary in a coal mine!”

Suddenly we both knew deep down that this was the unassailable answer that had evaded our “regular” health care system and caused me months of sickness and worry.  I feverishly packed my suitcase and left the cottage in 2 hours, fleeing instinctively to the home of a caring friend. That friend, Jeff, has come to my aide on multiple occasions since. I call him my guardian angel. We all need one. When I am in deep waters, he, too, is a saving grace.

As it turns out, I was in deeper waters than I had ever imagined. Getting to solid ground and the road that followed has been long and difficult. After much research and investigation, I discovered that I had been toxically exposed to disocyanate chemicals off-gassing in the walls of the cottage from polyurethane spray foam insulation.*

Although I found some helpful individuals, there are few medical specialists familiar with guiding others who have endured environmental toxic exposures. It is not a condition that is easily understood or solved. From that exposure to the poisonous chemicals, my immune system has been compromised, possibly permanently.

My body has become highly sensitive to any possibly dangerous substance. I have had to severely restrict my diet. If a friend shows up wearing chemically scented lotion or hair products, I have to cut our visit short. I had to leave a job I loved because of the chemical smells in the office, such as toner cartridge. My symptoms can be triggered by something as (seemingly) innocuous as a fabric softener dryer sheet.

I think back to when Flavia called me the canary in a coal mine and realize the accuracy of her offhand assessment. From what I have now learned about the dangerous chemicals being used every day, I believe I am indeed a harbinger of the unfortunate choices we are making that are destroying our environment and are sure to destroy the health of more like me if we continue.

Doctors tell me the road to health is avoidance. But there are so many things to avoid, I find it hard to have a place just to be, to live and to work safely. It’s been an uphill climb. Good friends and concerned people with their gestures of kindness, like those participating in the All One Fund, restore my hope and make all the difference.

Because of my background as an activist and social worker, I felt I had to advocate for better protections and clearer health information about this toxic product being sprayed into many people’s homes. Sadly my protests mostly fell on deaf ears in municipal hearings and in a letter sent to the town and state.

I hope sharing this story will help some of you, or your friends or loved ones.

I appreciate your support of my AIRE (Art Inspires Roots of Empathy) Project. Through it, I am raising funds for daily needs, and at the same time bringing art into environments where people need beauty and a lift of spirit to face their adversity.

I hope to inspire a spirit of solidarity, so that families working toward finding a home or individuals with disabilities know they are not alone. To feel that we are ALL ONE.

Since that day at the cottage, I find a momentary sense of oneness and healing when I go forest bathing or when Derby stops by to say hello and I can give her milk bones. She smiles. I revel in her corgi markings and resolve not to lose belief in the bright things.

One day at a time, I try to remember a gratitude practice. Coal mining lore says the actual canary that was brought into the coal mine had little control over its fate, but it continued to sing anyway. Living this way requires a willingness to experience life’s risks and dangers without compromise. I am still reaching for the song, impossible without the helping heart of Derby, who I thank for just being there in the coal mine with me. This intuitive courageous corgi, whose alertness, strength of character and knowing, led me, the modern day canary, safely out.

*Spray foam insulation contains isocyanates (toxic and odorless), and other chemicals such as amine catalysts, ammonia by products, flame retardants and 2 proprietary chemicals the manufacturing companies don’t have to disclose because they have a patent. These are “very toxic” according to a Brigham & Women’s researcher I consulted with after leaving the cottage.
Other people, in many parts of the country, are getting sick from this product. The stuff off-gasses poisons affecting the lungs and respiratory system. Houses, offices, and buildings are being made too tight, without adequate fresh air. Marketing schemes promote spray foam as a “green” product, claiming it conserves energy by holding a building tight.. With all of its chemical components and known toxins, the product is far from “green.” An insidious peril of modern technology, unwitting citizens are being duped. If you want to learn more, see published reports on Consumer Product Safety Commission website by typing in spray foam insulation under “unsafe product.”