Skip to Content
Home Healing Sleeping and Sweating
by

Waking up in a hot salty sweat. Wait, this is a Gratitude journal. Who would be grateful for that? Yes. Me.

It reminds me of the mild extremes of my ordinary life. By ordinary I mean doing things like growing up in a comfortable home, buying a first car, going 50 miles to college on a bus. It felt good to bump against the bubble of security where many of us live. These are a few of those mild extremes that relieved me of the ordinary thought that getting a 9 to 5 was in any way a good next step after college. 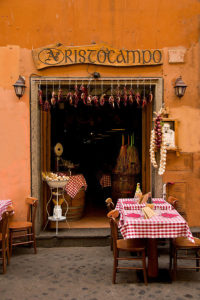 I was hot and sweaty waking up in a pensione in Naples. As I splashed my face at the old marble sink, unsteady memories from the night shuffled in. Stranger boys had closed their family restaurant for my friends and me. They cooked us spaghetti and brought bottle after bottle of chianti. We drank from jelly jars. Their cousin brought a guitar. Eventually we wandered off into corners to make out with them. Then we left, a giggling group listing left and right, and singing I think. (The photo is not mine, but it could have been. Picture us college girls all at the table, and boys, the cousins, the guitar, the wine. Thank you Xavier Cardell for the memory.)

I was hot and sweaty waking up in a half-built cement house on the Mediterranean. The heat was thick already at seven a.m. We were sweaty and pale, sick from a yellow fever vaccine required by the Peace Corps, where I was doing a tour in Tunisia. The Peace Corps thought it would be a friendly gesture for us, before and after our Arabic lessons, to clean the gutters of the town where we stayed. There was a stench to this task. Human waste was involved, and discarded parts of meat. I never smelled anything like it before or since. And you were irritated by the flies.

At midday it was too hot to do anything but lie on our polyester mattresses with our eyes closed. We didn’t sleep but lay there dreading 4 o’clock. That’s when we’d splash water on our faces and plod a half mile to the school. We had two months to learn horribly accented sentences. “I buy bread, please.” This and other key phrases would help us twenty somethings undo millenia and teach Tunisians to do things the Right Way like Americans.

I was hot and sweaty waking up with the ceiling fan directly above me. 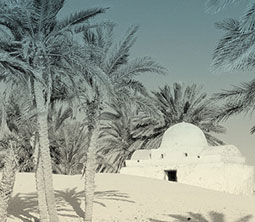 Eeek…eeek…eeek…eeek. It wobbled and squeaked. In the morning I  would never remember the moment I had stopped lying awake in dread and succumbed from exhaustion to the land of nightmares.

I had recently been robbed, so I slept with the windows locked. Every night I yanked and groaned and sweated till I got my gigantic bookshelf dragged into position to block the front door. I was afraid of robbers, but more afraid of loneliness. Your friends and family thought you were living it up in palm-tree paradise. You never told them of the nights like this, the madness of pitch dark and uneasy silence. You didn’t tell them how it killed you and saved you, the whir of the fan blades and a squeak, every. damn. second. that kept you on alert until your jacked up imagination lost consciousness.